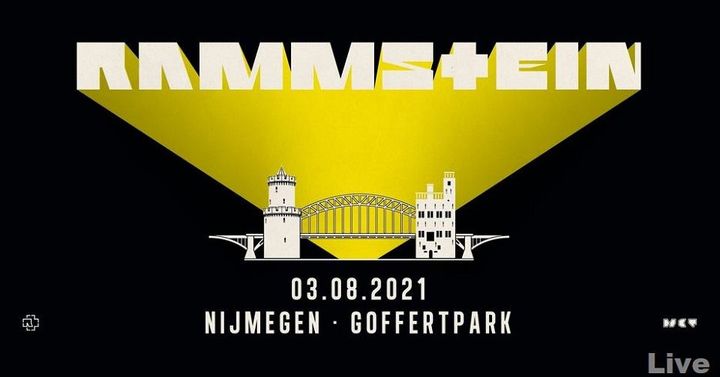 Venue: Goffertpark
Address: Goffertpark Nijmegen
Doors: 4:00 pm
Start: 7:30 pm
Special Guest: Duo Jatekok
EUROPE STADIUM TOUR RESCHEDULED TO 2021!
We’re delighted to announce here the new, rescheduled dates for the Rammstein tour, which had to be cancelled due to COVID-19.
All shows have been rescheduled to 2021, and already-purchased tickets will remain valid for the new dates!
If further evidence was needed that Rammstein currently rank amongst the greatest bands in the world, the matter should finally be put to rest following the release of “Rammstein”, the band’s seventh album, and the conclusion of the first stadium tour round. Because the evidence was there: scrolling through feuilleton discussions, the leap to the top of the album charts in several European countries, enthusiastic fan feedback regarding the album and the rave reviews of the tour, which was sold out in record time. The new stage construction, the sparkling, flame-throwing show, the perfectly orchestrated band, the humour and pathos of the Rammstein staging – all this is indeed rare in the music landscape in this magnitude and quality. It is thus only logical that Rammstein provide new opportunities for all its fans and those who will become fans to experience its “mega-show” (Merkur) which, with its “profusion of fireworks, massive explosions and smoke” (Sueddeutsche Zeitung) is currently making European “stadiums shake” (Nordkurier). Because Rammstein will be back, announcing: In 2021, the first stadium tour in its history will commence a second round!

This website uses cookies to improve your experience while you navigate through the website. Out of these, the cookies that are categorized as necessary are stored on your browser as they are essential for the working of basic functionalities of the website. We also use third-party cookies that help us analyze and understand how you use this website. These cookies will be stored in your browser only with your consent. You also have the option to opt-out of these cookies. But opting out of some of these cookies may affect your browsing experience.
Necessary Altijd ingeschakeld

Any cookies that may not be particularly necessary for the website to function and is used specifically to collect user personal data via analytics, ads, other embedded contents are termed as non-necessary cookies. It is mandatory to procure user consent prior to running these cookies on your website.